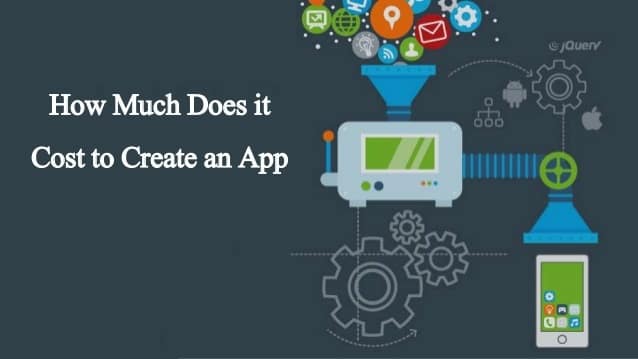 How Much Does it Cost to Create an App

Anytime you want to work on an app idea, it’s important to know the cost you can expect to turn your idea into reality. There are currently three million apps in various app stores, and they all have been developed with different budgets. If you call several app development companies to figure out the cost of a given project, you can expect to get very different answers. It may be impossible for you to know which number is most appropriate. It takes time and effort for both the Idea Owner and the App Developers to come up with the most appropriate cost.

But, what if there was a way to know the formula and process used by Developers to estimate the cost of an app? If you can know and understand the formula used by Developers, you can have a sense of the appropriate cost and then compare it with estimates provided. Many app development projects have the following models and cost can be divided into these models

1. Universal Formula to Calculate the Cost

Simpalm’s team has used its seven years of experience to come up with a Universal Formula that anyone can use to estimate the cost of an app. Here it is:

The hours required to build a mobile app depends upon a variety of factors including the size of the app, complexity, design requirements, the development process, backend server, maintenance, and several other related factors. A developer’s hourly rates depend upon the location and experience of the developer. An offshore vendor can charge between $15 and $25 per hour, a full onshore company can charge $70 to $150 per hour and a company with Onshore/Offshore resources may charge between $30 and $50/hour.

2. Determine the Size of Your App

A unique screen is something that is not repeated in the app with minor changes. It takes time and effort to design and develop a unique screen in the app. Once you determine the size of your app, you can have a better idea in terms of how much it might cost by following the cost factors defined in this blog.

3. Estimate the Design Cost of an App

It is very important to create a thoughtful UI/UX for the application. It does not matter if your app is small or big, this is the most crucial step of app development. It takes time and money to do UI/UX well, however, it will save you cost and time in the long run.  By having well-defined UI/UX requirements for the app, you can avoid cost escalation during the development of the project. The design process generally involves three key tasks:

Requirement gathering and wireframing are generally executed together. The graphical design is done once wireframe and requirements have been defined.   Developers will use a wireframing tool like Balsamiq or Proto I/O  to create the flow and screens of the app. Here are my estimated hours for the design of an app in three different sizes. The table also shows the cost of different types of vendors. Also, you can use this table to estimate the design cost of the project. 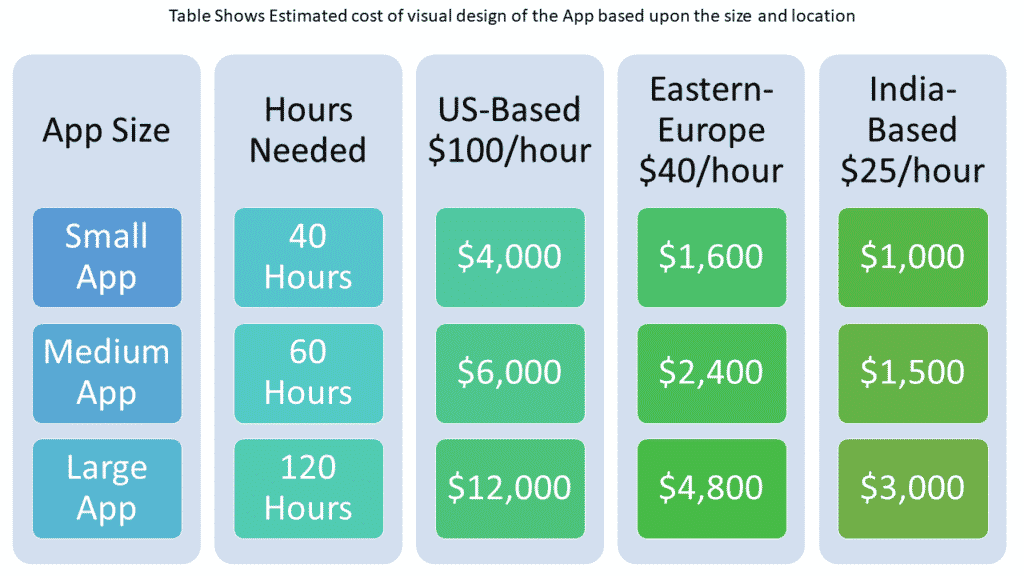 You can build your app using the Native iOS and Native Android Approach. Which is one of the best approaches to build high performing apps. You will need two separate developers to build your app on both iOS and Android platforms. Native android developers will be needed for the Android app and native iOS developers will be needed for iOS App.  If your app does not need a backend server, it will cost you less to get the app developed. You can use this Table to calculate the estimated time and cost to develop the app for one platform (iOS or Android). If you want to estimate the cost for both iOS and Android, just multiply the costs in this table by two.

Instead of using a native app development approach, you can also use the cross-platform app development approach to build your app. In this approach, you don’t need two developers to build an app for iOS and Android. You can use one developer to build apps for both the platform. Some of the popular cross-platform frameworks available these days are: React Native and Xamarin.  You may not get performance as good as a native approach, but in many cases, it turns out to be a good option. You may not be able to reduce the time by half compared to the naive approach, but it can be in the range of 70%-75% of the native approach for both the platforms. You can use this Table to calculate the estimated time and cost to develop the app using a cross-platform approach.

6. Estimate the Cost of Backend Development

Most of the applications these days do require a backend, typically to be able to save data on a backend server, and to be able to fetch it again for later use. Whether it is a social media app, news app, nutrition app, productivity app, or on-demand app, you will need to build a backend server so that the app can function. Any app that needs to allow one user to access another user’s data, will need a backend server. Building backend adds cost to App Development. As a leading app development company in Wisconsin, we recommend using Amazon AWS or Azure, a cloud-based backend so that the cost of development is less and maintenance will be easier. You can use the following table to estimate the cost of backend development an app.  Here is a table that gives estimates on app and backend server development: 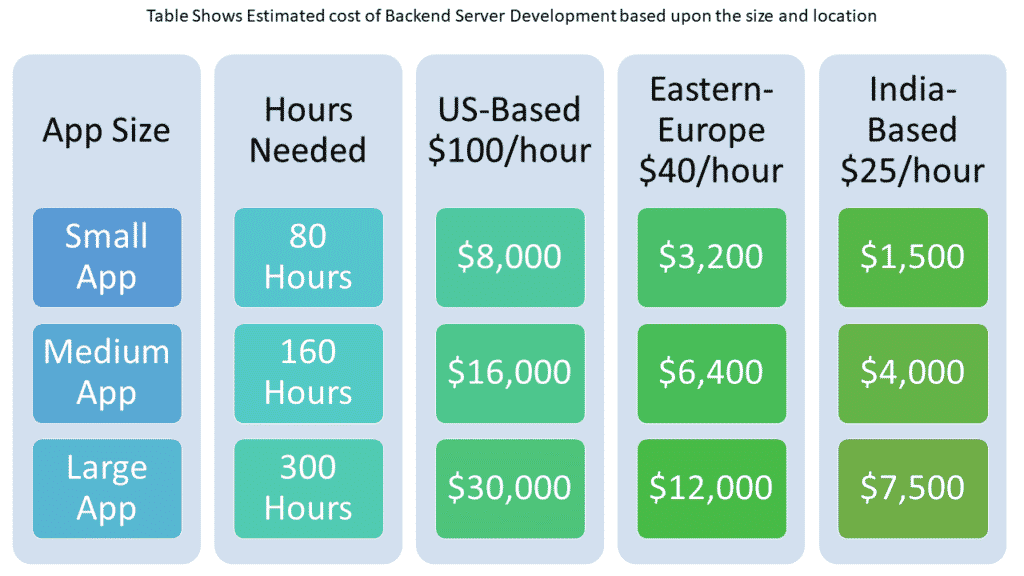 Once you launch the apps on stores, you may incur several additional costs. For example:

8. How can you reduce the cost of your app development

8.1 One Platform Vs Two Platforms

If you want to build the app for both the iOS and Android platforms, then it will cost you almost double that of building an app for one platform. As a startup, you just want to start with one of the platforms and launch it to capture the market reaction. iOS is the most preferred platform in the U.S. when launching an app for only one mobile platform.  Remember Instagram? They initially came out with an iOS app only, yet started with millions of users. If your app is done right, you will gain a market just with one platform and will then be able to replicate your success on other platforms.

You can build mobile apps using a cross-platform framework such as React Native, Xamarin, PhoneGap, or Javascript. These frameworks allow you to build iOS and Android apps using a single source code.  Generally, it costs less to build iOS and Android apps using the cross-platform approach, compared to the native app development approach. You save money, but you may have to sacrifice on scalability and design. If it is a simple informational app, you can build it using a cross-platform approach. However, if you will have complex functionality, very advanced design, animation, or integration with an external device, you should use a native approach. You can get pricing for both approaches and get opinions from different vendors on the pros and cons of a cross-platform approach for your project, to help you make a  smarter final decision.

8.3 Do Initial Wireframes and Requirements Yourself

You can reduce the design cost by doing initial work yourself. The major part of design work is writing requirements and doing screen sketches. You can find several sample requirement documents and templates that you can use to write your app functions and features. You may not have to be fully professional in writing these requirements, it is better to have something than nothing. If you provide a baseline requirement document to your designers, then it will reduce the number of hours needed to write it. Same goes for the wireframes, if you can do some sketches on a piece of paper which shows the screen flows and functions, it is easier for the designer to visualize the app flow and functions.

It is always less expensive to have a freelancer work on the project than an app development agency.  App development company would charge you more but they are more committed to completing your project and a vast pool of talent.  Working with freelancers has its own risk, you totally dependent upon the freelancer. If they lose interest in your project or find something more interesting, they may just leave your project and you will be stuck.  If you have some idea about product development and project management and can find good freelancer from sites like upwork, you can go for freelancer approach.

I hope this has helped you understand how developers estimate the cost of an app project. But, if you still have questions or need a more detailed quote for your app idea, please contact us.